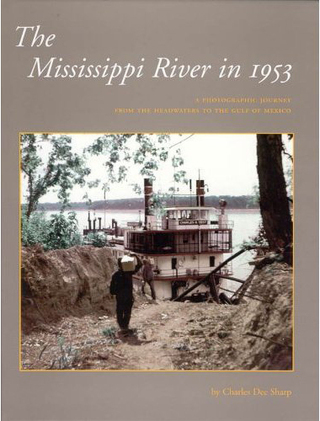 THE MISSISSIPPI RIVER IN 1953

From the author's Introduction:

“Once, when I was young, and just out of the army and the world was coming unglued, I had the idea that I should make a documentary film of the Mississippi River. It was an idea that began in earlier years when hitchhiking west I first saw the great river sparkling majestically in the morning sun...”

“I’ve stopped trying to understand why, individually and as a nation, we have such esteem for the Mississippi River. For me it says ”America” as nothing else does or can. It is what makes me an American. Were the Mississippi River not to exist, America would be a very different nation and I would be a very different American son. I do not just sense this. I know it...”

“In 1953, a young documentary filmmaker named Charles Dee Sharp traveled down the Mississippi River, shooting still photographs for a film he never made. One of Sharp’s pictures...is a color shot of rows of new red cornpickers awaiting shipment in Moline, Illinois... Those old pickers - so bright and new in 1953 - are a visual reminder of the vital, connection between America’s agricultural heartland and the Mississippi river.”

--Verlyn Klinkenborg, The New York Times
“The Mississippi River in 1953 is a special treat... The photographic record of his journey and the descriptive thoughts he entered in a journal connect us to an era that seems more than half a century ago..."
--Robert Armstrong, Minneapolis Star-Journal

“To describe Charles Dee Sharp in the spring of 1953 is to describe America of that time: war weary but eager to get on with life, naive and inexplicably self-assured, brimming with potential, if not capital. In that spirit the young army veteran set out by towboat and car to photograph life on and along the entire 2,350-mile length of the Mississippi River... Much has changed in these river towns and countryside since..."