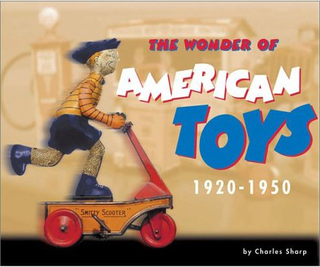 The golden age of any culture or endeavor is rarely recognized as such during its time. Those of us who grew up in what today is thought of as the Golden Age of American toys - from about 1920 to 1950 - assumed that the toys proliferating in the Woolworth and Kresge five-and-dime stores, the Wards, Sears, Spiegel and F.A.O. Schwartz catalogs, would always be there, that they would exist forever in the present, that history, as regards these toys, had stopped. We’ve since realized how wrong we were... “It was my intention to present a cultural history, an overview of life in America between the two World Wars as reflected by its toys...an era when toys were 'real'.”

“A great book to read - I enjoyed all the information and the pictures are great...”
--Charles E. Meeks

“TIn Charles Dee Sharp’s The Wonder of American Toys ...we have a celebration of toys from its golden age of the 1920’s through the 1950s. Accompanied by brilliant, full-color photography, it is an impressive sampling of the types of toys produced during this era. The book has separate chapters such as Farm, City, Airplanes, Boats and Dirigibles, Trains, Construction, Music, War, Radio, Movies, Guns - such as Red Ryder, Character toys such as Charlie McCarthy and Felix the Cat and Betty Boop... This is a beautiful book!”
--Tim Janson

Introduction
Down on the Farm
Home (Sweet Home)
Life in the Big City
America Takes to the Road
Constructing a New Century
Down to the River and the Sea
On the Atchison, Topkea and the Sante Fe
The Sky’s the Limit
March of Progress; the World Expands
Listening to the Radio; A Ticket to the Movies
A Theatrical World - the Sound of -- Music?
The Comics
Cops and Robbers
Cowboys and Indians
Prejudice and Racism
Carnival! The Circus comes to Town!
The Sporting Scene
America Goes to War
America Enters a New Age